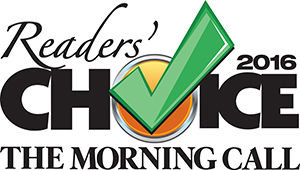 Burkholder’s Heating and Air Conditioning has added a 2016 “Reader’s Choice Award” presented by The Morning Call to a growing list of honors earned through diligent and comprehensive service delivered to customers throughout the Lehigh Valley.

The 13th Annual Reader’s Choice Awards were announced by the paper on Sept. 25.

Readers of The Morning Call vote in July and August for businesses they think are the best at their business. Voters cast ballots either online or via paper ballots for 301 designations spread among five categories: dining and restaurants; home and services; recreation and entertainment; shopping; and wellness and personal style, according to the paper.

“We are very grateful and proud that our customers continue to support us like this because it demonstrates the quality of service, knowledge and reliability that Burkholder’s brings to every customer,” said company President Bob Burkholder.

The recognition is the latest in a series of tributes Burkholder’s has received over the past year.

In January Burkholder’s was named to the “Who’s Who In Business” list selected by readers of Lehigh Valley Style magazine and in March Burkholder’s earned the coveted Carrier President’s Award presented annually to Carrier Factory Authorized Dealers through a special process that combines three years of data for specific criteria. It is awarded to only about 150 companies annually out of approximately 6,500 eligible dealers nationwide, according to Carrier.

Burkholder’s was also honored this year with its fifth consecutive Super Service Award from Angie’s List, a national, member-based Internet ranking site for service contractors and other professionals.